“The proposed measure does not belong in Virginia’s Constitution. Preventing citizens from voting because of their past mistakes or their inability to pay does not reflect Virginia’s values,” said New Virginia Majority co-executive director Tram Nguyen. “We thank Virginians for all the calls, letters, and visits to lawmakers to oppose this modern-day poll tax and are grateful that the General Assembly responded by not carrying forward a Jim Crow-attack on voting rights.”

We applaud Gov. Terry McAuliffe’s announcement today to veto “anti-sanctuary” bills that would have prevented localities from exercising reasonable and appropriate discretion in how they interact with immigrants and immigrant detainees.

Anti-sanctuary bills, such as HB2000 and SB1262 risk public safety and enshrine discrimination. At a time when many Virginians are struggling, our elected representatives must focus on issues that matter most to working families — good jobs, quality public schools, affordable health care and housing, and more.

“Sanctuary prohibition bills won’t create one job or educate one child,” said New Virginia Majority’s Co-Executive Director Tram Nguyen “Instead, it makes intolerance the law of the Commonwealth, and it will open our localities up to legal liability. Virginians want policies that make us more, not less, welcoming to newcomers.”

Today’s announcement came the day after Richmond Mayor Levar Stoney affirmed the city of Richmond’s commitment to protect all its residents, regardless of status, and its refusal to participate in Immigration and Customs Enforcement (ICE) enforcement programs.

“We won’t stop working to make Virginia fulfill the promise of its residents to be a just, welcoming and democratic place.” Nguyen said.

New Virginia Majority organizes for progressive transformation of Virginia through mass organizing of communities of color, women, immigrants of all statuses, working people, LGBT people, youth and progressive people to create a Virginia that is democratic, just and sustainable.

We applaud the recent announcement by Attorney General Mark Herring that the Commonwealth of Virginia is joining the lawsuit against Donald Trump for his unlawful and unconstitutional executive order banning entry into the United States to people from certain countries.  The executive order, which targets our communities -- refugees, immigrants, Muslims, and other vulnerable people — has resulted in an escalating climate of bigotry and xenophobia, and people living in fear and confusion throughout the state.

"My family came to this country in 1981 as refugees, fleeing a war-torn Vietnam,” said New Virginia Majority Co-executive director Tram Nguyen. “My family’s story is not unique. For many, like my dad, to not leave is to face certain death. The current exodus of Syrian refugees cries for the same humanitarian response that saved my family. Politicians who would reject families who seek safety from terror don’t represent my values or the values of those who welcomed me and my family to Virginia.”

We thank Attorney General Herring for this announcement, which is a critical step to protect democracy and the people of the Commonwealth. 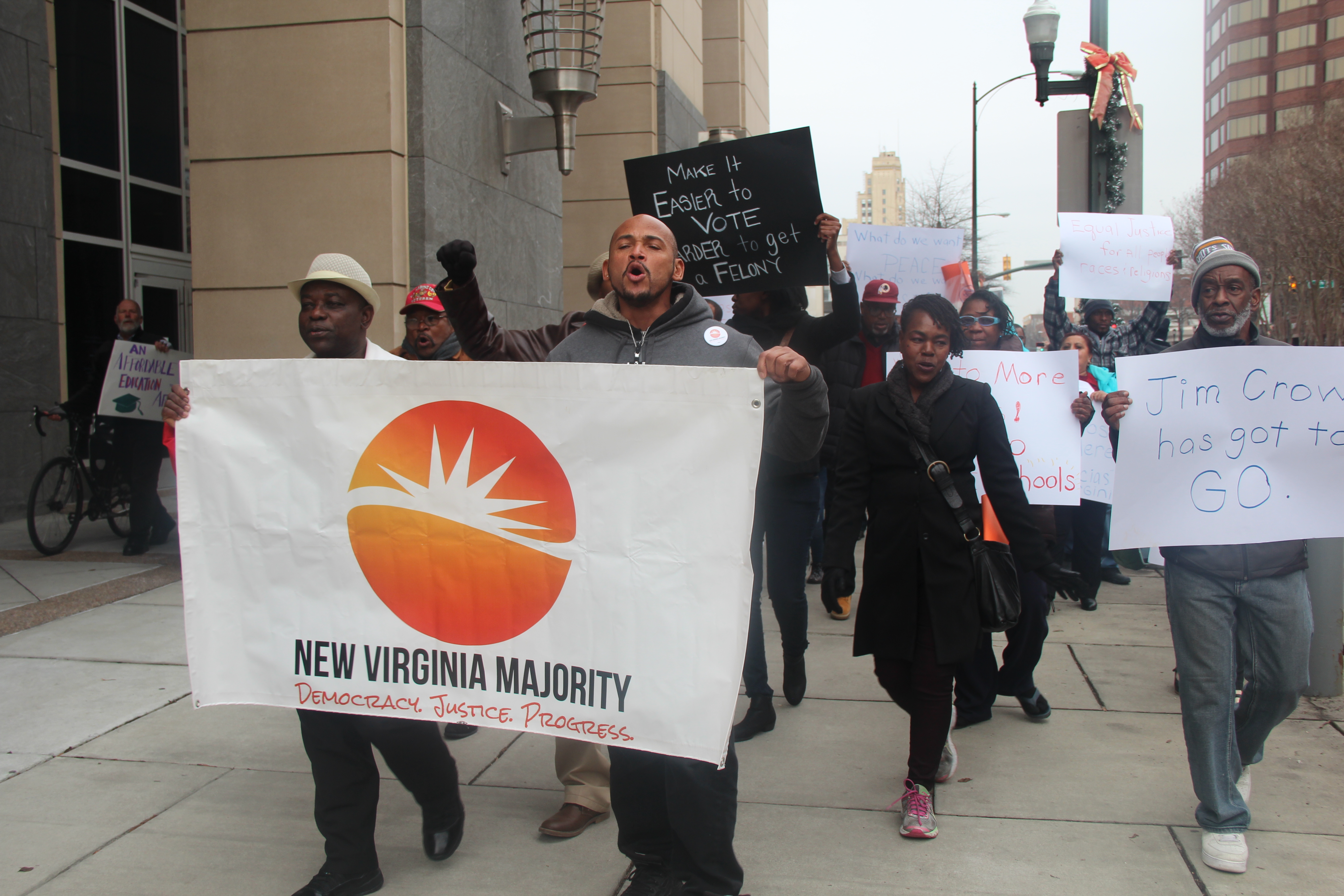 The agenda includes the following:

“The repeal of SB 1256 and expanded absentee voting gives more Virginians the chance to participate in democracy,” said New Virginia Majority co-executive director Tram Nguyen. “It ensures that citizens who have job conflicts, travel, childcare, or transportation challenges are still able to have their voices heard and their votes counted.”

Our democracy is strongest when everyone can participate.Prioritizing good governance and ethics, and a robust expansion of voter access are key components of a healthy democracy. Maintaining gratuitous barriers to voting, such as regressive photo ID laws, laws against absentee voting, and laws against early voting seek to limit access to the ballot. Those who oppose voter access oppose democracy.

New Virginia Majorityorganizes for progressive transformation of Virginia through mass organizing of communities of color, women, working people, LGBT communities, and youth to create a Virginia that is democratic, just and sustainable.

“We’re pleased with today’s order to extend Virginia’s voter registration deadline to ensure every eligible Virginian who wants to register to vote is able,” said New Virginia Majority co-executive director Tram Nguyen. “The right to vote is at the heart of what it means to be an American. For thousands of Virginians who recently had their right to vote restored, this order means they will have a voice in November, many for the first time. That’s something we can all be proud of.”

Under the order, eligible Virginia voters have until 11:59 p.m. on Friday, October 21st to submit their voter registration application. All eligible Virginians will have the opportunity to participate in the 2016 November General Election by registering to vote online or submitting a voter registration form by Friday, October 21, 2016. Virginians can visit www.registerva.com to register.

New Virginia Majority organizes for progressive transformation of Virginia through mass organizing of communities of color, women, working people, LGBTQ people, youth and progressive people to create a Virginia that is democratic, just and sustainable.

Today, it was announced that Gov. Terry McAuliffe will not be held in contempt for continued efforts to  restore voting rights to formerly incarcerated Virginians. After the Supreme Court of Virginia (SCOVA) struck down Gov. McAuliffe’s April executive order he vowed to prioritize restoration, issuing approximately 13,000 individual orders. Since then over 4,400 of those 13,000 people have re-registered to vote. With today’s decision, SCOVA has thrown out the latest attempt to prevent formerly incarcerated people from voting. We can rest assured that those who re-registered after Gov. McAuliffe’s individual restoration orders were given will have the opportunity to exercise their voting rights in November.

"People in the community can now feel confident the process won't be derailed by any more back and forth litigation about their right to vote," said New Virginia Majority Co-Executive Direct Tram Nguyen. "Now we can focus on the important work of restoring their rights and helping them register to vote."

“This decision gives me hope,” said Christopher Rashad of Richmond, who recently received a restoration order. “Having so many disenfranchised individuals get into the democratic process make me think we may be able to effect serious change in some of the poor decisions made by elected officials.”

Those who oppose felon voting rights oppose democracy. This victory restores our hope that, in the end, justice and progress will always prevail.

New Virginia Majority organizes for progressive transformation of Virginia through mass organizing of communities of color, women, working people, LGBT communities, and youth to create a Virginia that is democratic, just and sustainable.